This hurts me more than it hurts you

I always knew that one day I’d be forced to choose between journalistic integrity and being a fan boy… I just wasn’t expecting that moment to come quite so soon and definitely not because of BioWare.  Our loyal readers can tell you that I’ve been obnoxiously chomping at the bit for days in anticipation of the newest expansion pack (or DLC; I’m old school) for Mass Effect 2 titled Arrival. Because I heard someone mention that the combat had gotten “boring,” since the initial release, here’s my disclaimer: I didn’t come back to Mass Effect 2 after a long hiatus just to find out that the game hadn’t aged well or the combat didn’t stack up to the hyperactive shooter Bulletstorm: I had just completed Mass Effect 2 on “Insane” and enjoyed it the fourth time through as much as I had any other time, so my reaction to Arrival was filed under “Surprises, Bad.” 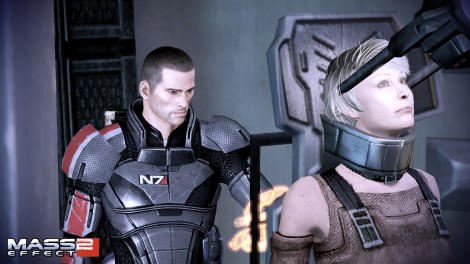 That's what I felt like had been done to me after playing.

Not a bridge so much as a pier

BioWare has been describing Arrival as a bridge between the end of Mass Effect 2 and the beginning of Mass Effect 3 for a little while now but after playing through it, I was a little confused at how the brief story and events were anything other than a platform overlooking the gulf between now and Mass Effect 3‘s release.

I received a message from Admiral Hackett of the (human) Systems Alliance telling me that he had lost a deep-cover operative in Batarian space and that he would consider it a personal favor if I’d go rescue her.  To the normal person, that might seem like a pretty big favor to ask, but in Commander Shepard’s world, it’s pretty par for the course.  Then, the esteemed Admiral (voiced very well by Lance Henrikson) seemed to decide that I agreed too easily and threw in a bit of a curve ball: I wouldn’t be able to take my team with me.  The things we do for old friends.

Although I’m not going to spell out the entire mission: MINOR SPOILERS AHEAD.  Sans crew members, I headed to Batarian space, pondering why in the world a game that is based upon squad-based combat would send me off on a solo mission but decided that since I’d done the same thing in Mass Effect‘s Pinnacle Station, it might work out just fine.  My shuttle dropped me right into the thick of things without much preamble and I was off, killing Batarian prison guards left and right and rescuing the captured spy.  Act 2 of Arrival took place on a giant secret asteroid base (sorry, no super-lasers), involved intrigue and treachery and ended up putting a little bit of a kink in the Reapers’ galactic extinction plans.  Act 3 wraps things up (in just a mite under 90 minutes on “Insane”) with Shepard and Admiral Hackett meeting up on the Normandy discussing how Shepard’s going to take the fall (again) because it’s good for the galaxy.

Not the most satisfying story line, even though it sets Shepard up for a return to Earth.  Honestly, I wouldn’t have minded if Arrival‘s game play had stacked up to the previous DLC, Lair of the Shadow Broker.  It didn’t.

The little gameplay missteps that I thought I was insulated from when I played something from BioWare seem to have crept into Arrival – my Infiltrator’s sniper-scope slow-down didn’t work at all in the DLC after working just fine in the Collector base, reloading often required jamming on the “X” button repeatedly, and the cover-and-strategy combat that defines Mass Effect 2 was almost non-existent.  Since I was on my own, I couldn’t funnel enemies towards teammates in cover and even if I had been able to, Batarians wiped me out in a wave of fire as they charged directly towards me to kill the distracted deep cover operative trying to hack a computer.  When she wasn’t occupied, the operative shared a description with Earth as far as my enemies were concerned: Mostly Harmless.  To be fair, I was playing on “Insane,” but I’ve beat the game multiple times and there’s a difference between the difficulty level being high and the overall way that the game plays being altered.   The experience in Arrival tended towards a much faster-paced shooter… without any adjustment to the rest of the gameplay coupled with some odd bugs in the mechanics.

Don't mention the scar. Don't even look at it.

On the up-side, Arrival didn’t cost too much, it was nice to put a face to Admiral Hackett and I’m sure I’ll appreciate the extra heavy weapon ammo and reinforcing skin weave the next play through (yes, I’m playing through again.  I can’t go into Mass Effect 3 without having made all of the choices I want my Shepard to have made).  I realize that this is coming across as a very harsh review, but I’ve become accustomed to a very high level of excellence from BioWare, I think Mass Effect 2 is in the running for one of the best games of all time and the hyping of Arrival had really gotten my hopes up. But…when I played it and compared it to Lair of the Shadow Broker and the rest of the Mass Effect 2 experience, all that I ended up feeling was disappointed.