It’s not every day that you find a well-established development house moving into the role of publisher and backing a developer with a distinct but perhaps under-appreciated identity into the crowded genre of first-person shooters, but when you pick up a copy of Bulletstorm, that’s exactly what you’re getting.  Developed by Epic Games (the people who brought you the Unreal Engine and the Gears of War franchise) and People Can Fly, the Polish dev house who brought us Painkiller, Bulletstorm doesn’t try and out-Halo Reach nor does it try to (rifle) butt-stroke its way past Call of Duty, rather, People Can Fly and Bulletstorm try and blast out their own niche with a mix of The Club’s kill-with-style point system, Epic Games’ now-trademark Michael-Bay-wishes-he-could-do-this summer blockbuster cinematic/set-piece battles, the (still delayed) 15-year-old-boy humor we first saw in 3D Realms’ Duke Nukem  3D and what struck me as a mix of Insomniac Games’ riff on the lethal weapon selection from Turok 2: Seeds of Evil a Mad Max: Beyond Thunderdome-meets-Mushroom Kingdom Plumbing & Plant Care plot with a dash of Richard III + Payback mixed in.  The result is Gibson-esque: a highly entertaining experience with moments of greatness saddled with alternately confusing and disappointing elements that don’t destroy the end product…but make you wonder if there was some unused potential left on the story-boarding floor. 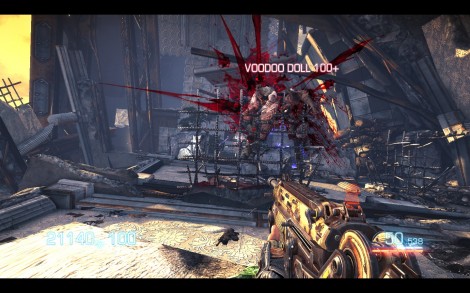 Rebar: no longer just for holding up concrete and smashing head-crabs.

In my pre-XBox 360 days, I was a huge Ratchet & Clank fan and I’ve become a believer in the C.O.G. since enlisting in its fight for Sera, so I felt confident that I was going to enjoy Bulletstorm‘s gameplay, visuals and overall concept.  However, I hadn’t had any experience with People Can Fly and had no idea if it was a studio who knew how to successfully do what the superstars of any artistic craft do on a consistent basis: come up with a strong recipe early on, stick with it and refer to it throughout development so that their end-users are met with products whose parts and sum are strong individually and collectively.

In other words, the sound should stand out on its own as great sound but it should also fit in with the “tone” of the game; the plot’s themes and structure should go along with the types of characters and character models; the visuals should have a distinct feel that isn’t incongruous to the plot, the sound and the theme.  Sometimes, in order to get that done, risks have to be taken: a developer needs to stand up to pressure from its publisher to integrate the mode du jour;  the game designer needs to overrule design-by-quorum to keep the plot tight; the underlings need to convince the producer that, e.g.,  guns on the Batmobile are a horrible, horrible idea.

One of these guys is going to die and battle-planning by committee is the reason.

While People Can Fly managed to put a lot of good individual parts together in Bulletstorm, it wasn’t quite as successful at integrating all of them together into the seamless masterpiece of violence, destruction and dicktits I was looking for.

Noble Pirates! In space! Out for Vengance!

That’s the plot.  Moving on.

Oh, alright!  You play as Grayson Hunt, who you will immediately notice is voiced by Stephen Blum, the guy who voiced Wolverine in the X-Men animated series and Grunt in Mass Effect 2.  (He also looks like Wolverine, FYI).  Wolveri…er, Grayson has been done wrong by his former spec-ops commander, General Serrano, and is out for blood with the rest of his spec-ops team.  Unfortunately, it’s hard to exact revenge, especially when you’re being pursued by bounty hunters.  (Oh, and when you’re drunk.  Really, really drunk.)  Still, a little bit of pillage and plunder with your buddies on the outskirts of civilized space goes a long way, so at the game’s opening (where you William Tell an empty liquor bottle off of a bounty hunter’s head while drunker than $700), everything seems to be going cheerfully bad – imagine Firefly with lots of cursing and no Morena Baccarin.  Fast forward about 10 minutes of a “these are the controls and let me introduce you to your crew, made up entirely of Red Shirts,” mini-mission and a crash-landing on a planet full of crazy, heavily armed psychos, mutants and carnivorous plants and Bulletstorm gets going.

After being introduced to your now half-cyborg partner and killing a few dozen charging enemies with your ubiquitous assault rifle, you acquire the Energy Leash, which is half Indiana Jones’ bullwhip and half universal ID/debit card.  You can use it to “leash” your enemies toward you, access the upgrade-shop Drop Pods scattered throughout the world, and occasionally trigger environmental damage or door switches.  If the Energy Leash is the Ying, your giant, combat boot clad foot is the Yang. Although you’d think it’d be difficult to run with size 28 shoes, you can’t argue with the result of booting an enemy to the face: they go flying in semi-slow-motion which lets you shoot them, whip them, blow them up, wrap a remote-detonated explosive Bolas around them or stick them with a remote-controlled explosive sniper rifle round and direct them into a crowd of enemies hidden behind cover. 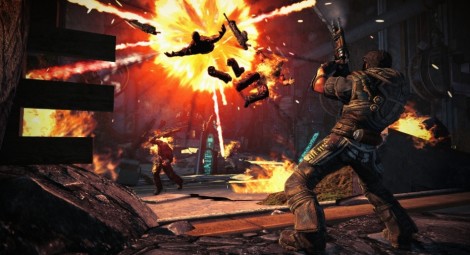 If you haven’t noticed by now, the weapons are very much front-and-center, although not mentioning the femme fatale would be remiss of me: early/midway through the game, you run across the leader of your team’s replacement under General Serrano, a young woman with a potty-mouth (and dark, somewhat mysterious past) named Trishka Novak.  Between her and your C-3P0/Bruce Banner teammate Ishi, Bulletstorm sets us up with Princess Leia, Han Solo and Chewbacca…the R rated versions, anyway.

Comedy or Tragedy – Pick one

Every discussion I’ve had about Bulletstorm’s in-game dialog (which is full of cursing but is basically a “best of locker room lines” interwoven throughout the game), the dark revenge plot and themes of corruption and falling from grace has had a universal and consistent reaction: Huh?

As an individual piece, the in-game dialog is funny and fits in well with the very vivid and slightly cartoony graphics since you’re getting points for creative and disgusting kills and there were enough one-liners that I don’t recall hearing the same exclamations over and over.

On its own, the story is dark with a little bit of Paradise Lost and metaphorical father-son battle for the girl with the added benefit that they killed her father.  It’s well written and the voice acting of Jennifer Hale as Trishka, in particular, is outstanding.  While it’s not Henry V or anything, the plot and cutscenes make for an engaging story with both dark and exciting elements that falls somewhere on the continuum between The Empire Strikes Back and God of War.

Together, though, it’s like strawberry preserves and mayonnaise: either one is great on its own but together it’s just…weird.  You can have comic relief in a tragedy; often times, you need it.  You can have dark and poignant moments in an action/comedy – they give it a little bit of gravitas and keep it from being silly (e.g., the difference between Lethal Weapon 2 and Lethal Weapon 4), but you have to pick between comedy and tragedy.  When you do what Bulletstorm has done, you end up with the dialog of a comedy/action shooter in a game with a dark and fairly serious story line.  For the campaign, the juxtaposition just doesn’t work.

What does work is the gunplay.  Taking cues from the Rachet & Clank weapon upgrade system and combining it with one of Bulletstorm‘s advertising points, Skill Shots, Bulletstorm boasts pages and pages of (easily accessed and sorted) ways to creatively kill your enemies.  Think about all of the achievements or special upgrades or red coins you spent hours trying to find even though you had a pretty good idea where they were/how to pull them off and you’ll realize how badly People Can Fly could have screwed this up.  Instead, the descriptions of the individual Skill Shots are almost clear across the board – there’s an entire page of undefined skill shots that you seem to pick up when you kill certain bosses or use unique environmental hazards to deal with enemies. 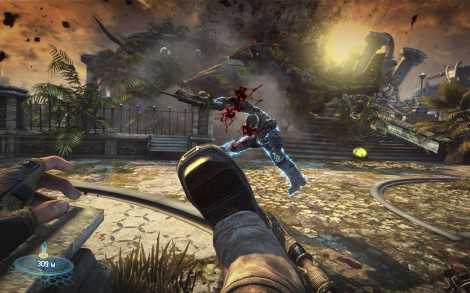 Kiss called. They want their shoulder pads back.

When gigantic cacti, long drops and swarms of electric beetles aren’t available to dispatch your enemies, Bulletstorm gives you a fairly wide selection of weaponry with which to deal death and destruction; on top of an alternate firing mode for each of the weapons, several of them are either unique enough on their own or significant enough tweaks that they deserve serious praise.  The Flail Gun lets you wrap up your enemies and dispatch them explosively or with another weapon (“Sadist”) but also lets you decapitate enemies hiding behind cover or heat up the flail to red-hot to decapitate multiple charging enemies (“French Revolution”) while the Bouncer launches explosive bowling balls at your enemies for contact kills (“Facial”) or for you to boot back towards them (“Kick of Doom”).  The Headhunter sniper rifle (my favorite) takes a slightly different approach to sniping, forcing you to lock on to enemies but giving you the ability to steer the bullet over and around obstacles, even hitting a nearby enemy instead of your intended target (“Bluff”) or taking the one-hit-kill ability of the Headhunter one step up by tracking your dodging enemy and hitting him from behind (“Rear Entry”).

Since the guns and stylish killing are the real stars of the game, it’s time to mention the additional game mode that gives Bulletstorm its strongest bid for replayability and is probably going to generate some smack-talking between some of the Horrible Night staff: Echo Mode.

Nothin’ but the creamy filling

I’m a big fan of pastries, especially the ones that have some sort of filling in the middle.  Even if the pastry itself isn’t downright delicious, the filling in the middle can often times save the entire experience from mediocrity…and Echo Mode is Bulletstorm‘s creamy filling.  Echo Mode takes the best parts of the best battles in the game, gives you access to limited ammunition & weapons and tells you to go forth and get as many Skill Shots as possible.  With each “Echo” running from 3:00 to ~15:00 minutes, they’re little tastes of the game where the dialog and storyline don’t conflict and you don’t have to worry about conserving your ammo too much since Echoes are short and sweet.  The Echoes have a three-star rating system which encourages you to play again and again, pulling up your list of Skill Shots to figure out which ones you haven’t yet used and what combination will garner you that third star.  Combined with a friends-and-global leaderboard, it’s Echo Mode, not the solo campaign that’s going to keep me coming back for more dicktits. 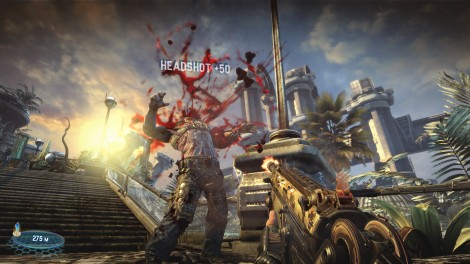 Bulletstorm was a terrifically fun game that absorbed all of my attention for about a week.  It had some issues in finding a consistent tone between its dialog and plot but the gameplay, mechanics, voice acting and fun-factor were all fairly well done and the Echo Mode brought the game up another notch.  While not taking the multiplayer into account (we’ll get to that in a separate review), I would recommend Bulletstorm… but probably when the price drops to ~$40.  I’m not upset I paid $65 for the Epic Edition since I got the Gears of War 3 Beta with it, but without that or a pre-order that had been transferred so many times I felt compelled to use it on Bulletstorm, if I had it to do again I might wait a little longer to pick it up.