I have always been a suburbs type of guy, never fitting into the country atmosphere, and forever fearful of living downtown in a major city. There is nothing more targeted for monster and alien attack than a city full of skyscrapers. Recently, my fears were proven right and I to learn the lessons of Rampage.

The Lessons of Rampage

Ladies are reptiles (and all animals truly are naked)

I learned something today. You know how people always ask “if you were an animal what kind of animal would you be?” and people fake thoughtful replies that are funny, clever, or scary but never true? I’ve always been curious what the real answers would be, and I’ve been especially suspect for a while about the true animal form of women. Thanks to a recent monster attack on our fair city, I was fortunate enough to witness the answer for myself. Three monsters attacked our skyscrapers at once and while I kept my distance, I was able to determine that the perpetrators were two men and a lady. Several times during the attack the monsters would revert to a human form which helped prove my suspicions. You won’t be surprised to find out that the men took the form of ape and wolf. Seems pretty natural as I’ve heard plenty of men described as dumb apes and lone wolves. The lady though? She was a giant cold-blooded lizard. I will leave you to dissect that metaphor because that epiphany alone has made the world make a helluva lot more since to me now. Thanks, Rampage.

I learned something today. It is important to keep your wits about you in a monster attack. I’ve always used humor as a defense mechanism, and although I’m not proud of it I couldn’t help but crack a few laughs at the behavior of our gigantic foes. Although resilient and agile, these animals were prone to falling off of our buildings more than King Kong had prepared me for. After a while, it was apparent that they were not exactly thrilled with their performance either. They especially struggled what should have been their most triumphant moment when they caused an entire building to collapse upon itself. The monsters could never seem to jump to freedom in time, and instead would hover in mid-air and cover their faces in shame as they fell to the ground. It was out of a cartoon, and actually physics anomaly to the likes I’d never seen. These monsters were destructive and dangerous for sure, but they had feelings. It could have been much worse if we had been attacked by more graceful creatures. Thanks, Rampage.

You are not responsible for turning into a giant monster

I learned something today. Although our city was leveled in the end, we had some chances for victory that our military failed to act upon. As I mentioned earlier, the monsters would fall from time to time and revert back to human form when they were at their weakest. In human form they would shuffle off slowly, seemingly undetected. Our tanks, helicopters, and even some intelligent storm clouds in the area would continue to attack the last place the monster was seen. They completely ignored the human the monster had become. It was baffling. Even after witnessing the human turn back into the same monster on site, they acted as if nothing had happened. To this day the wolf man wanders free, and could attack at any time. While I recognize the need for a trial rather than execution on site, you should at least arrest these people or something. Instead of acting like nothing ever happened. Thanks, Rampage. 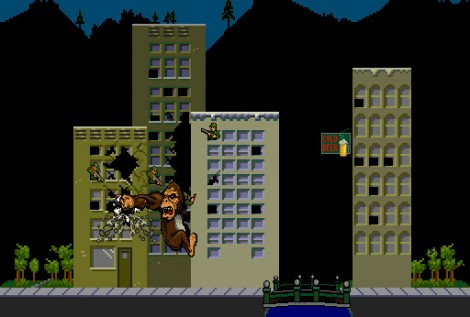 Cactus free buildings are what they want.

Cactus owners are onto something

I learned something today. The cactus plant may have single-handedly staved off the destruction of our city for hours longer than it would have taken otherwise. The creatures’ plan were to bash in as many windows and walls to as many rooms as possible to weaken the structure. Once the window was open and the walls were down, these monsters saw the need to loot the rooms as well. Except for those rooms that were protected by cactus plants. Truthfully, I was surprised by the sheer number of cactus plants per building, but obviously these tenants were prepared. Maybe it’s common knowledge in the city, but rooms with cactus plants and toasters staved off looting and more destruction from monster attacks. Allowing the building to withstand punishment for just a little bit longer as the monster directed his/her attention elsewhere. In other news, I think I’m moving to the desert. Thanks, Rampage.

Someone had to document this incredible event in our city’s history for the rest of the world. I’ve heard rumors that these attacks could occur anywhere over the next 128 days. I’ve even heard threats of a “World Tour.” This could be a global disaster. I advise stocking up on cactus plants and even toasters if they are available in your area. If you need me, I’ll be on my iguana farm in the middle of nowhere. Thanks, video games.