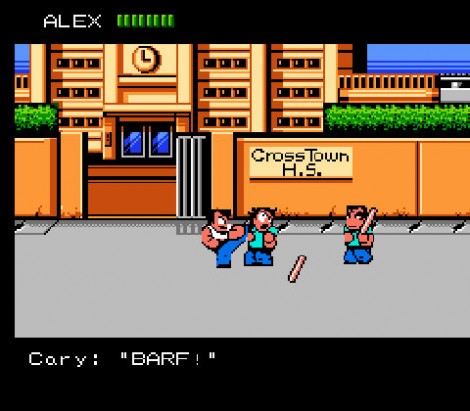 Last week, I read the fantastic news that Miracle Kidz will be releasing a sequel to River City Ransom on the Japanese WiiWare service this summer. I was immediately excited for the potential of a U.S. release to my favorite brawler of the NES era. However, I couldn’t help but think if you are already creating character art assets for that game, you may as well repurpose them for a proper Super Dodge Ball sequel. I didn’t have to wait long as a few hours later GameInformer confirmed that those same kidz were working on that very miracle.

River City Ransom will seem familiar to anyone who played the recent Scott Pilgrim games on XBLA as it was heavily inspired by RCR. And of course, there’s the amazing Daft Punk Dance Video. As for Super Dodge Ball, it was a lesser known sports title, but anyone who played it can attest to it’s super powered throws of awesomeness. If you doubt me, I present further video evidence, and if you still doubt me, my boy, Sam, will be happy to beat you into submission with his laser ball.

I don’t know where Miracle Kidz came from but they skyrocketed to being one of my favorite developers in a matter of two news stories. You know, assuming these games actually see the light of day outside of Japan. Both titles are only scheduled for WiiWare releases in Japan, with River City Ransom 2 also being planned for a PC port.