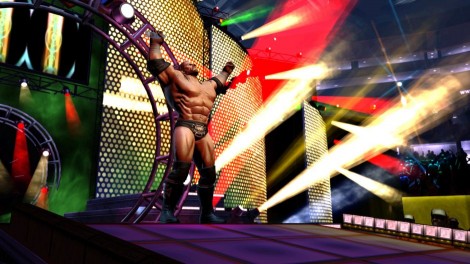 It's almost time to play the game.

As you might have heard by now, I am what you call a wrestling fan. It’s not something I’m extremely proud to admit because of the stigma that comes along with being a fan of a “fake” sport. But like I described myself in this week’s podcast, I’m a riddle wrapped in an enigma. That being said, THQ released the demo for their upcoming arcade style wrestling game WWE All-Stars and I got my hands on it as soon as Microsoft twisted some knobs and let the download flood the Xbox Live Marketplace.

If you’ve read my other two articles (WWE All-Stars Looks Flat Out Ridiculous and UGH! WWE All-Stars Tag Teams with Facebook) on WWE All-Stars you know that I’ve been looking forward to this game since I first found out about it. You should also have figured that out because it’s the only game I’ve taken the time to write more than one article about (besides Secret of Mana). First off, I have to say that WWE All-Stars is as exactly as I expected/hoped it would be. Now some people get disappointed by their expectations being satisfied, but I’m so often underwhelmed that I appreciate when my presumptions are met. 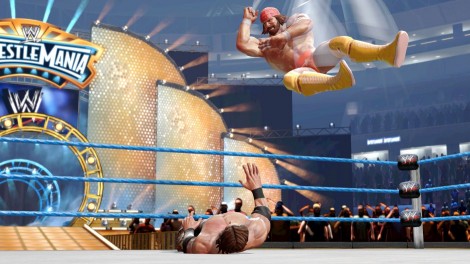 From the top rope!

In the demo you are given a choice of two wrestlers, one from the past and one from the present. More specifically you get to choose from the Ultimate Warrior, who fits the brawler category within the game, and Rey Mysterio who represents the acrobats. There are two other classes included in the full release of the game: Big Man and Grappler. Obviously wrestlers such as the Big Show and Andre the Giant will fit the Big Man category while Triple H and Bret “the Hitman” Hart will find themselves among the grapplers. Even though I was disappointed that Ultimate Warrior and Rey Mysterio were the choices for the demo, I still got a good idea of how the game actually plays.

If you are a fan of the Smackdown vs. Raw series that THQ has been putting out yearly, you need to know that WWE All-Stars is a huge departure from that series. It is definitely more in the style of the old THQ/Aki games like WCW/nWo Revenge and WWF No Mercy. The controls are very familiar if you played those games and there is a reversal system that I know JDevL will master and piss his opponents off in the process. Basically when your opponent performs a move an indicator flashes below your health bar letting you know when to press the reversal button. You can reverse grapples, strikes and can even reverse reversals! 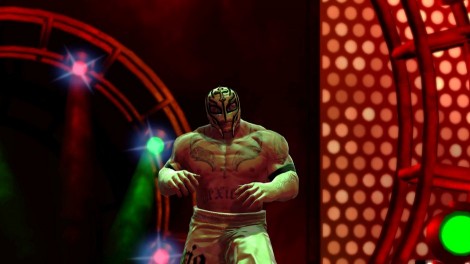 There are two buttons for punch/kick, a button for light grapple and a button for heavy grapple which is very simliar to the old Nintendo 64 games I mentioned above. Fans of those games should have no problem picking up the controls. Yeah, it is a little different but way less complicated than the SvR games. However, what stands out to me the most is the inclusion of signature moves which are executed by pressing two buttons at once when you are near an opponent. The moves are over-exaggerated versions of moves that are performed in real life. The same can be said for the finishing moves as well. For example, the Ultimate Warrior’s gorilla press slam sends the opponent spinning through the air about 40 feet off the mat. Moves like this bring the shocked curses and the laughter along with it.

The presentation is what you would expect out of a WWE game. The visuals are great and the wrestlers are oversized behemoths which isn’t far from what they are in real life. But the game renders them as caricatures which fits well in the type of game THQ created. I assume all of the correct entrance music will be included as Rey and Warrior both had entrances reflecting their real life counterparts.

Surprisingly enough there is a ton of depth that I haven’t even scratched the surface of. You can string moves together in ridiculous combos and even juggle your opponent with punches. For the first time in a long time I’m excited about a wrestling game and I can’t wait to take my skills online against the millions… and millions of fans in the WWE Universe. WWE All-Stars will be released March 29, 2011 on Xbox 360, PlayStation 3, and Nintendo Wii.