Umm, what was that? If that isn’t one of the most disturbing trailers you have ever seen for a video game, I don’t want to see the one that is worse. First off, little kids screaming about killing and death are creepy. Nevermind the fact that this “girl” was voiced by a grown woman acting like a child doesn’t help the creepy factor at all. Nevertheless, it looks like a fun game.

In Swarm, you control 50 Swarmites in environments where dangers lurk around ever corner. These creatures have no idea what dangers might soon befall them, so you control their destiny. The goal is to get to the end of the level with the highest possible score but that doesn’t necessarily mean rescuing all the Swarmites. To move on to the next level, the player just needs to have one Swarmite left alive, but the more you have the better rewarded you will be. It might remind you of Lemmings, but Swarm is much more involved and cold-blooded than Lemmings ever hoped to be. 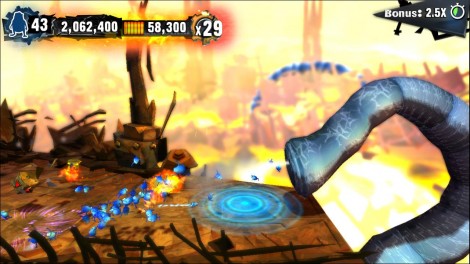 A lot of Swarmites were harmed in making this game.

An interesting twist on the in-game achievements are the death medals that Swarm will reward you with. For each unique death you inflict upon your oblivious smurfs, you’ll receive a medal. The system discriminates between ways of death which should bring an extra level of sadistic choice to the player.

Brought to you by the creators of Deathspank and the Penny Arcade Game, Swarm is out now on both Xbox Live Arcade and the PlayStation Network.