I love tower defense games for their simplicity (I’m a very simple man, except of course for the complex brain irregularities I possess), but after a while they start looking and playing exactly the same.  Revenge of the Titans caught my attention for its unique look, but it was its interesting mix of RTS and tower defense that kept my attention. For those that hate the relative lack of control offered in most tower defense games, RotT may be the game to bridge the gap and provide you with material for future conversations with your’s truly. 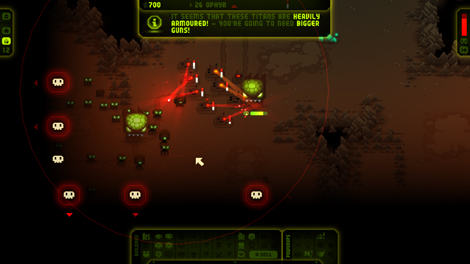 Awww, look at those cute little….AGGGHHHHHH!!!!

In RotT, you’re tasked with defending the galaxy from wave after wave of horrifyingly cute monsters called Titans (which come in a variety of styles, shapes and sizes, some of those varieties being far less cute).  This task is accomplished by placing offensive towers and other obstacles in their path in order to slow them down, wittle them away and end the invasion once and for all. You start the campaign mode off with standard blaster towers but as you progress you can research technology and unlock better weapons, enhancements and other items that improve your chances against a foe that gets stronger with every level.

While fighting off the Titans is your main motivation in the game, you can’t buy weapons without resources, so mining the crystal like material on each level becomes as crucial as setting up your defenses. As you mine, money icons appear and must be clicked on to be added to your bank in a way similar to the sunshine mechanic in Plants vs Zombies. This, along with the ability to manually reload your weapon towers, takes the passivity out of a genre of games that tends to involve more planning than fast twitch reflexes. 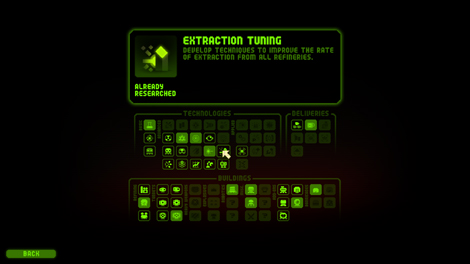 There is not a ninja power up, but robots are available

A wrench in the gears

Most tower defense games make it impossible for the enemies to attack your defenses, but the same cannot be said for RotT. You have to be careful where you place your towers as the Titans have no problem chewing them up and moving on through. To make things worse, the Titans don’t always follow a preset route so it can be difficult at times to determine where you need to concentrate your firepower, defenses, etc. At later levels, the Titans even appear from multiple entry points, adding further chaos to an already intense game.

The art style, while simple, is perfect for this type of game.  At first glance, the mostly black buildings and enemies against muted backgrounds may appear bland, but the color highlights and special effects help to draw your attention to where the action is. Subtle nuisances like the glowing eyes of the Titans and the fire from trampled buildings further demonstrate the attention to detail Puppy Games had when creating this game. I would have loved to see tiny people fleeing for their lives, but the lack of such a feature isn’t a deal breaker. I especially enjoyed the characters that talked you through your missions in-between levels, and I liked the conflict between brains and brawn that played out between the tough military guy and the super dork scientist. 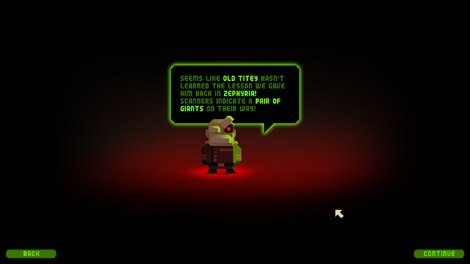 There’s not much that stands out about the sound design since it fits well alongside the cute simplicity seen throughout RotT. The larger Titans emit some pretty menancing sounds, and if their size doesn’t get your attention, their angry roars will. When the poop really hits the fan is when the noises get a bit annoying, as sirens blare when your home base gets attacked. I just really hate sirens.

The bad kind of confusion

The game is not without its faults, as a few mechanical issues introduce some frustration right off the bat that continues further along in the game. First off, the save system is confusing since it saves each level individually as opposed to saving full playthroughs. Also, money is transferred from round to round, but you don’t know that up front which means that spending too much money can hurt you in the long run. 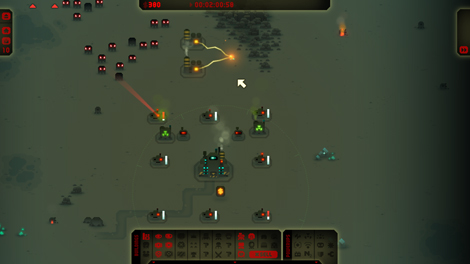 Another gripe I had with the Titans is their varied enemy design requires the use of multiple types of tower, but depending on what research path you take such towers may not be available. For instance, tiny robots are needed to defend against miniature enemies that spew forth from defeated enemies later in the game, but attaining robots takes a few tech upgrades that aren’t necessarily obvious in the beginning of the game. In addition to that, certain tech upgrades only contribute to unlocking  certain weapons in conjunction with other tech upgrades and don’t have any sort of short term effect. This means that you may go a few rounds without gaining any additional usable technologies, which can be a bit frustrating (though I love to see constant progression so I may be spoiled a bit on that point). Some enemies (such as the Ghosts who could only be killed by a user controlled electric tower) were a bit frustrating, but I can’t knock the game for introducing a challenge.

Revenge of the Titans packs quite a bit of punch for a small price ($14.99 on Steam), and once the campaign mode is complete it offers up an endless attack mode and another level based mode to further extend the experience. It’s a solid game for tower defense fans, as well as those concerned about attacks from intergalactic monsters. For those that are curious about the game, there’s a demo available on Puppy Game’s website (I recommend starting there). All in all, I was pleased with my RotT experience and the good qualities far outweigh the bad.