When I first heard that Telltale Games was releasing Back to the Future: The Game, I have to say I had mixed feelings. In my opinion, very few movies have made the transition to games and succeeded. One could say that I’m just narrow minded when it comes to the kinds of games I enjoy, which I am. But, the fact of the matter is I love movies, and I love games, so I should be able to love a game about a great movie. 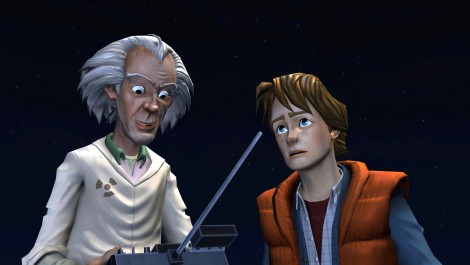 This is heavy Doc!

It completely slipped my mind that this game was even out. I didn’t pay too much attention to it at first because it was only launching on PC/Mac initially. Now that there is a PS3 demo I figured it was time to give it a try. I’m glad that they were actually able to secure a few of the original cast voices for the game. Someone doing a bad impression of Christopher Lloyd would’ve ruined it right away for me, but Doc Brown was spot on so the cinematic scenes were going to be good. As far as the gameplay, I really didn’t know what I was getting into. The intro to the demo was off to a good start.  I feel like they made a good choice with the graphical style they chose as opposed to trying to go too realistic. The music was straight from the movie. All around, they did nice job with the setup and had everything going for them. They pulled pretty much everything straight from the first movie with Doc and Marty in the parking lot testing the time machine with Einstein. A nice addition I’ve been seeing in a few games lately is that during the dialog you get the option to choose your response to certain things.  I couldn’t tell if your choices really effect the game or if it’s just for your entertainment during the longer animated scenes. I probably could’ve figured it out by playing through the demo a few more times, but for me once was enough.

It wasn’t until the game actually started that they lost me.  I don’t blame the game, it just wasn’t for me. I thought the control felt a little awkward.  They make it look like you can walk almost anywhere you want, but it’s pretty restrictive.  The fixed camera angles are weird in some spots, and it took me a second to figure out what was even going on.  As you walk around you’re overwhelmed by a ton of text popups of things you can interact with.  Most of it was for no reason other than to add to the challenge of figuring out what you were supposed to do. It’s really nothing more than a sequential puzzle game.  You have to do things in a certain order to get from point A to point B. I think having seen the movie definitely made the puzzles easier.  The demo was extremely short, but it was enough to tell me that I wasn’t going to enjoy the full game. I’m not sure if they’re going to gain any benefits of releasing the game in chapters, but that approach works since there is obviously enough story content to pull from and break it up in such a way. 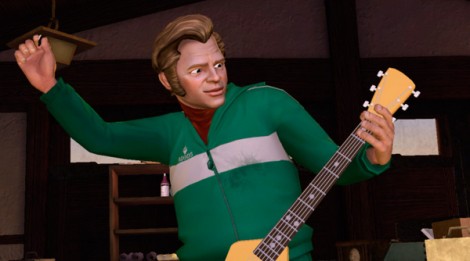 Biff is still a tool.

To sum it up, Back to the Future: The Game doesn’t look like a bad game. It just wasn’t for me and I don’t think that it will appeal to everyone.  Fans of the series might enjoy it with all of the direct movie references but the game aspect of it seemed repetitive and not very challenging for your die-hard gamer. You have to kind of take it for what it is and just enjoy the characters and story you loved from the movies. To all of the Moms out there, this could be a good game for your young, inexperienced gamers. It’s safe, not too difficult, and the story is fun.

Back to the Future: The Game is being developed by Telltale Games and released through 5 episodes for PC, MAC, PS3, and iPad.  PC and Mac get first dibs, with the PS3 following shortly behind, and the iPad being the straggling step-child. The schedule for initial PC/Mac release is as follows: