When Torchlight hit the PC downloadable scene in 2009, it was oozing a level of quality not normally scene from $20 video games. The game exhibited the purest and most addictive form of a loot hungry dungeon crawler with a solid fantasy steampunk art style. Although feeling very familiar and comfortable to genre fans, Torchlight was just different enough that millions of people were willing to give it a try. With a hit on their hands, it was time for Runic Games to take on the daunting challenge of converting one of the last, great PC-only game styles for consoles. Of course, when your team includes individuals that created Diablo, which defined the genre for a generation, maybe it’s fitting that they bring it to the controller first. 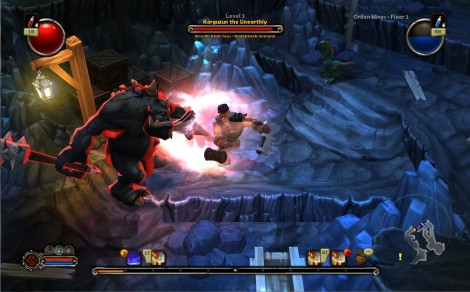 You're kinda' big for Level 2

Let’s get this out of the way: I am a big fan of Torchlight on the PC and was an avid Diablo 1 player. I love questing, I love clicking on an enemy until they die, I love looting and I love demons. That being said, I was skeptical of Torchlight‘s (or any game like it) ability to be playable or fun on a console. RPG’s that require the management of multiple skills and constant resource management normally lend themselves to a point-and-click interface rather than a scroll-and-push design enforced by a controller with buttons. I saw two ways the conversion of Torchlight could fail. First, the interface would be clunky and make the game unplayable. Second, the game would have to remove features in order to simplify the gameplay, making the game dumber and less fun. Solving those two issues though, would mean the potential for this game and its genre on the consoles is wide open.

The core gameplay of Torchlight revolves around your hero arriving into the town of Torchlight and delving into the local mine to fight the evil forces that have taken refuge there. You choose from one of 3 playable classes with unique skills Destroyer (Warrior), Alchemist (Mage), and Vanquisher (Ranger/Rogue). As you fight through the dungeon your character gains attributes and talent points to build up your character’s strengths and unlock special abilities. Enemies constantly drop loot for upgrading your equipment or to sell back for gold. Equipment can also enhanced with enchantments or through ember gems that you find/buy throughout your journey. You are joined by a pet companion (dog, cat, or lizard) who aids you in combat and has the fantastic time-saving ability to go back to town and sell your extra loot while you stay and fight in the dungeon. Nothing groundbreaking here as to character or story progression, but it’s tried, true, and accessible to any level of player. 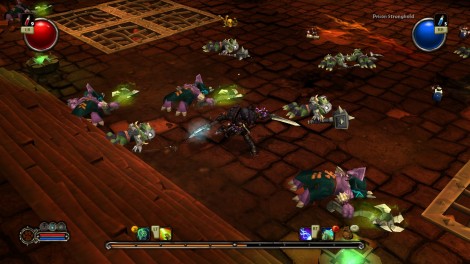 So how does it play? I’m thrilled to be able to report that the game plays like Torchlight, which is an amazing feat that means I lost track of 3 hours before I knew what had happened. When you are in the dungeon, player movement is tight and responsive. Luckily, combat is handled by pressing down the X button rather than tapping it as quickly as possible as if it were a mouse button. This subtle change illustrates just how much Runic broke down the gameplay of Torchlight and modified it from the ground up for the consoles. Potions for health and mana are mapped to the shoulder buttons for easy access, and spells and abilities are mapped to the remaining buttons by the player. That gives you access to 4 skills/spells at one time with the ability to swap to another set for a total of 8 mapped skills. I never ventured beyond my favorite 4 skills as I fell into a comfortable groove with combat and stuck to what I knew worked. Other players will be more adventurous, but I feel Runic found a middle ground with not overwhelming players with too many options and allowing an additional layer of depth/customization.

Sure, if you want to get complicated

Your level of enjoyment with the combat will also vary on your preferences. I played through the game on Normal which was hardly challenging as I died only once due to my ignorance of walking into an obvious trap that killed me before I knew what happened. The gameplay is a victim of the genre in that it is repetitive and boring by the end of the game if you don’t take risks. Playing as the Vanquisher allowed me plenty of means to control the enemies so that I rarely got touched. Anytime I noticed my weapons weren’t doing enough damage to keep on progressing quickly, I moved onto side quests to level up my equipment. The side missions are accessed through portals given by quest givers or through shops. These new areas are randomly generated dungeons that have enemies to match your current level, which means once I fought through these side missions, I was leveled up beyond anything that could give me trouble in the main dungeon. This made the side missions more enjoyable for me and allowed me to feel dominant in the main storyline. Your choices will vary your experience, but I suggest bumping up the difficulty if the action starts to drag, which I never came across. The variety in enemies and level types varies just enough to keep the main story paced very well. Your constant sense of progression will push you through to the end and is the main reason that Torchlight is so much fun to play.

The quest structure can seem overwhelming to new players. As I’ve played a number of RPG’s over the years, it is difficult to know where a game does and doesn’t branch off. Torchlight keeps your options manageable and much more simple than you first expect. After you get through the first few bosses of the main dungeon and venture back and forth to town a few times (use the portals for the love of god), the differences between side quests and the main questline become quite obvious. I don’t attribute this as a fault of Torchlight, but more so of recently playing games with way too many options that I’m more accustomed to having to manage too much rather than just the right amount. That’s why I think Torchlight is a great introduction to RPG’s for gamers who haven’t played it before and a nice break from other more-involved games for fans of the genre. 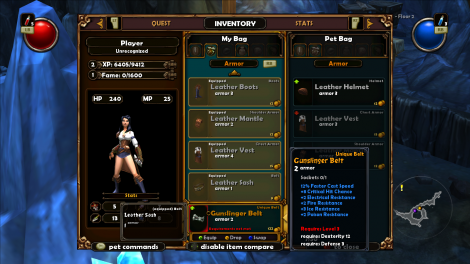 All that simplicity being said, every gamer is going to have a learning curve with the user interface. Give it a few hours and it’ll be much smoother. Most of my issues originated with managing my inventory while talking to a shop owner. You will have three columns of inventory to navigate through – the shopkeeper, your inventory, and your pet’s inventory. Switching between them using the shoulder buttons is where I struggled. It’s far from perfect, but still not the nightmare I feared. In other ways, the inventory system is much simpler to use than the PC version, so I think newcomers won’t have to make some of the adjustments PC fans will experience. This is obviously where a majority of the design process came into play in porting this game and they made tremendous strides compared to other titles like DeathSpank. As with advanced combat techniques, most of my issues with item management only came up when I was trying to do specific actions like selling individual potions rather than my entire stack. Annoying, yes, but not a deal breaker for a downloadable title.

Let’s close those menus though. Torchlight is about action, discovery, and delving one level deeper into the core of the earth to face enemies you haven’t seen before in hopes that they give you a game-changing item. I adore the the art style of Torchlight. The gear is always changing subtle features of your character. The colors are vibrant and vary based on how deep in the mine you are with the level type changing roughly every 5 levels. Enemies stand out from one another and subtly highlight so you know exactly what you are targeting and can adjust your attack strategy accordingly. The unique sounds of each creature will have you identifying them before you can see them on screen. At times you will be engaged with long battles with a couple of enemies, or managing a swarm of them attacking you at once. It is worth noting that I did experience framerate issues during some of the more chaotic battles, but it wasn’t consistent issue. Every time I broke out of the atmosphere, something quickly pulled me back in whether it was a new treasure chest discovery, an unexpected boss encounter, or even the haunting music. It is easy to forget you are playing a budget based title. 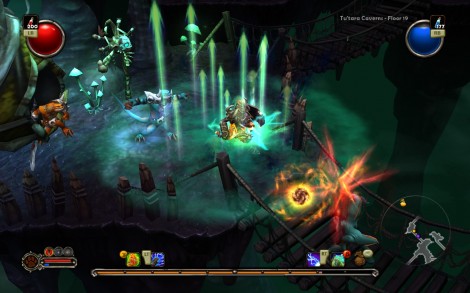 Towards the end of Torchlight, the difficulty started ramping up and I could feel my frustration mount. I felt close to the end, but just wasn’t sure how much of a fight was left ahead of me. About that time, I came across one of the named elite enemies and he dropped an epic weapon dropped that dwarfed anything else I had seen to this point. It was if my efforts to that point had been rewarded and my character turned into a bad ass hero. I dominated the lead-up to the final encounter for which my gear was adequately prepared for. Although the challenge wasn’t consistent, the satisfaction was evident and rarely do I feel like the hero when I complete a game. I did feel like I had saved Torchlight and my character had improved throughout the adventure, which is exactly what dungeon crawlers bring out in their players and something that console downloadable titles have been missing.

With a lengthy demo, you are free to try it out for yourself to see just how wonderfully lost you can get in the world of Torchlight. I envy new players to the genre and invite the veterans to remember why you fell for it in the first place. You’ll feel just as home with the controller as you did with the keyboard, and now that Runic Games has slayed the console conversion creature both PC games and console games are sure to reap the benefits of another great genre making the leap.