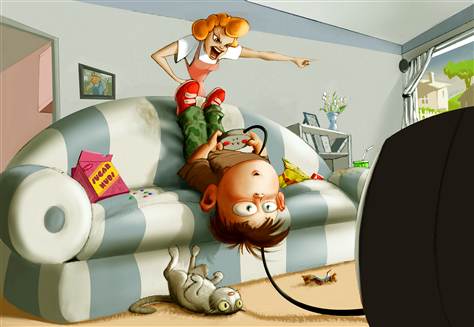 First off, you know those name tags that say, “Hello, My Name Is:”?  Well, I’m not grown-up enough to write “An Authority Figure” on mine.  For my younger cousins and nieces & nephews, I’m the semi-adult who tells their parents to calm down over the misunderstanding with the hair spray and the cat and teaches them cool (read: kind of dangerous) stuff like how to properly make a potato cannon or do a backflip off of a boat, so this isn’t some sort of lecture from a real adult. You know, where you zone out and say “Okay, sure,” or “I’m sorry, it won’t happen again,” when they stop talking at you?

That said, we need to talk.  Here at Horrible Night, we’re doing our best to teach your parents about the history of gaming, the important characters and plot lines and trying to convince them that a lifetime of gaming doesn’t turn kids into scrawny, pale underachievers with no friends or chance at success in life.  Hopefully, they’ll get the message that video games can inspire us, teach us new things and generally be positive forces in our lives…but we can’t do it on our own.  I’m not going to patronize you, guys – you may be too young to buy beer, but that doesn’t make you idiots whose opinions don’t count, so here goes. 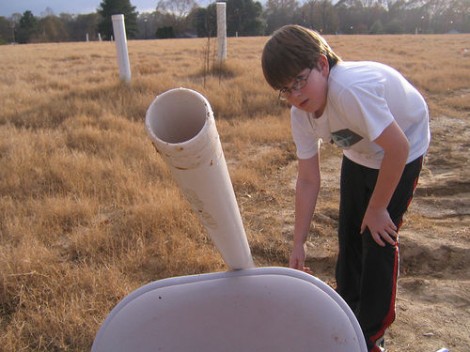 Semi-adult supervision is recommended since that's who the cops will go after.

No matter how many times we tell your parents that the Horrible Night staff consists of productive members of society with social lives and real jobs despite being gamers or that playing Wolfenstein 3D (think Call of Duty 2 with really, really bad graphics) didn’t turn us into violent psychopaths, there’s only so much that we can do.  Since you’re reading this, chances are that you follow the gaming industry news and you’ve heard of Jack Thompson and the other loudmouths who don’t play games but are positive that playing them will turn you in to some sort of brain-washed, conscienceless domestic terrorists, let alone Fox News’ hyperventilation over Bulletstorm.  I know they’re idiots and you know they’re idiots, but they’re adult idiots who managed to get on TV or publish an article in Newsweek…and you know what that means: your parents are probably going to listen to what they have to say.  Believe me, I know how frustrating trying to convince your parents that these guys are idiots can be, but there is something that you can do.  It’s simple, and it’s the one thing that we keep trying to get your parents to do anyway: play.

I know that sounds retarded, but stick with me here for a minute.  Super-violent FPS’s aside, we know that not every game out there is going to have tits and ass and evisceration and d*#ktits.  We know that not every online game we play is going to be full of hyperactive jackasses spouting really intolerant crap.  We know that Brandon Stokely turned 90 degrees at the goal line to run out the clock in the playoffs because it’s something that you do in Madden…but your parents may not, and the only way we can get them to realize that video games are not The Devil is for you to get them involved. 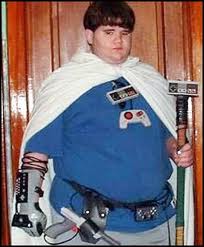 Thinking you'll turn into this guy is what keeps your parents up at night.

If the only time they spend thinking about your gaming habits is when they see your grades, notice the lawn still isn’t mowed or when they see a screenshot from the next evening news special called, “These Games Might Turn Your Child Into a Criminal,” you shouldn’t be surprised that their attitude towards your favorite form of entertainment is only a little less hostile than if they discovered that you were huffing gasoline in the garage.  On the other hand, if you ask them to help you out with a puzzle in the new Back to the Future game (even if you don’t need their help) you might be surprised at their reaction.  They’ve seen the Back to the Future movies, they probably liked them and you can point out that not only are there no boobs, bullets or blood, you’re playing something that makes you think.  Is your dad a big fan of sci-fi?  See if you can get him into Portal 2 when it comes out.  Mom into cute fuzzies and think you ought to be watching The Disney Channel?  Ask her if she’d like to help you design some levels for LittleBigPlanet 2.  Even money says she thinks it’s cute, realizes that you’re learning physics when you play and design…and, not that I’m advocating staying up past your bedtime, but if you did, you might find her grinding through some levels on her own.

I’m Not An Idiot Disclaimer: I KNOW I’m asking you to play games with your parents and that sounds about as fun as going to the dentist, but A: your parents control the checkbook that pays for your games, the electricity and your internet connection; B: it’s a lot harder for them to yell at you for playing games when they see what’s fun about them; and C: it beats the crap out of getting stuck working on that 10,000 piece puzzle on Family Game Night, now doesn’t it?

If you can get a full-family Madden or NBA Jam tournament going, your parents’ opinion about gaming is going to change.  They’ll have a backdrop in their minds to contrast with the “All Games Are Evil!!!” bit on CNN.  They’ll have some clue about why you’re excited that there’s a sequel for ‘Splosion Man.  They might even have fun and that whole “family time” thing they keep talking about?  It might mean that down the road, you’ll have to start thinking about whether you can turn up the difficulty on Civilization V on your dad without him noticing.  If you’re not careful, you might find out that your parents turn out to be decent gamers that make getting a co-op game a lot less of a hassle than relying on XBL’s haphazard matchmaking. 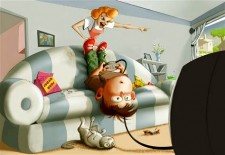 Easiest way to avoid this happening: Ask mom to play.

So here’s the deal: we’ll keep doing our part by being a resource and advocate of gaming for you, but we need you to do your part.  Get your parents involved! Find something that you’re both interested in and give it a shot – you might be surprised how it works out and we get another ally in convincing the world that playing video games as a kid doesn’t turn you into a failure.

P.S. – Use your brains when you pick out a game to play with your parents, guys.  Your copy of Left for Dead 2 that you snuck past your mom probably isn’t the best choice for Family Game Night.

P.P.S. – Don’t be a jackass when you’re playing online.  Trust me, the people at the other end of the mic aren’t the only ones who can hear you and making your mom wonder about washing your mouth out with soap isn’t going to help our cause at all.