﻿I am relatively compulsive when it comes to picking up cheap games during Steam sales and happened across a rather entertaining game in Majesty 2 this past weekend. Seeing as I quickly lose interest in most games, I figured I should probably call attention to this little nugget before it joins the ever growing graveyard of unfinished games on my computer.

Majesty 2 is referred to as a “fantasy kingdom sim,” which is suitable should your fantasy for running a kingdom include constant attacks from an endless supply of monsters. Your goal, for the most part, is not dissimilar from most real time strategy games where the player has to construct buildings and produce units in order to defeat his foe. During the course of each mission, you’re giving a variety of tasks to complete in order to achieve victory, so it does feel a bit deeper in terms of game play than other similar titles. 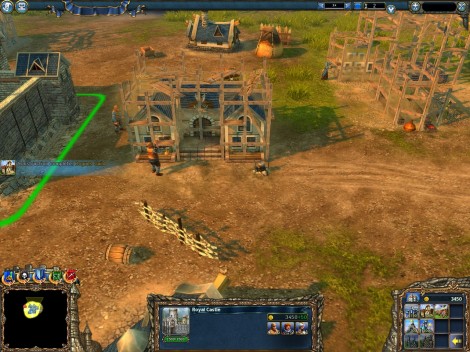 The town's people build well but get eaten very easily by monsters.

For the most part, you’ll need to clear the land of an annoying batch of monsters that constantly flow from caves, portals and even sewer pipes. The strange and often times frustrating part of the game is that some of these items can be destroyed in order to stave off the monster attacks and some cannot. The ones that can’t be destroyed tend to pop up within your city limits, so there’s not much time to dilly dally in the beginning nor does a heavily fortified base mean you’re safe as the levels progress. The monsters themselves are pretty standard, but I did enjoy being attacked by a race of rat men whose only move was a spinning jump kick…which turns out is very effective in damaging guard towers.

The real twist comes from the fact that you don’t have direct control over any of your offensive units, so producing a massive wave of knights doesn’t guarantee that they’ll actually be of much use unless you can utilize the incentive based flagging system (which essentially equates to bribing units to complete tasks). You choose from an explore tab, a protect flag, an attack flag and an avoid flag that is best described as the yucky face sticker of the fantasy world. So instead of clicking on an enemy and having your units attack, you set a flag in the general area you need some assistance, attach a numeric value and wait for the results. The value that you attach to a certain task determines what type of unit takes heed and how quickly they do so. A 100 gold payment for exploring an area may interest a low level archer, but other more experienced units will ignore it for richer prizes. It’s an interesting way to play and adds an element of strategy that I’ve yet to see in the genre. 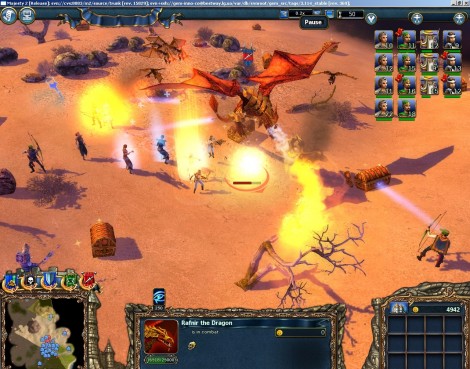 Fighting this dragon can be pretty expensive since, well it's a dragon

The units themselves come in a variety of flavors and gain levels as they battle monsters or explore the land. Not having direct control of these units makes preservation a bit tough, but they tend to be relatively smart in determining what they do in their free time. I did have a level 1 archer named Archibald run headlong into a Hell’s Gate on his own and quickly succumb to evil skeletons, but I attributed that to poor common sense on his part. It is fun to see the units (called heroes in the game, though I find that a bit presumptuous since some of them suck) go out on their own when you don’t commission work for them, and it does give the game a more organic vibe.

The type A gamers of the world will absolutely hate this game, but the type B-Z gamers might find something to like in the quirky title. I got it for $4.00, but its currently $19.99 on Steam and I’d recommend it to fans of sim games as well as real time strategy enthusiasts that want something to change things up a bit.