Meanwhile… we’ve actually been playing games. Each week we recap our recent gaming experiences and tell you what we’re looking forward to, so you can use your time more wisely than we have. Streetalchemist starts us off this week with a recent classic while Gifftor moves his attention from one Epic game to another. Ethan finally finishes a 3 year old game and returns to the new version of Vegas. Justin reignites his flame for Torchlight while Cole is discovering it for the first time. 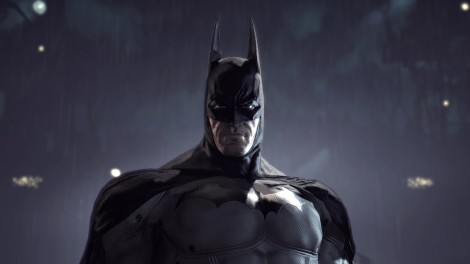 Every piece of business should include Batman in some way.

I’m currently suffering from Horrible Night syndrome. Yes that’s right, I’m currently having a case of the “Never enough time in the day for video games.” I’ve been playing plenty, but I seem to be game ADD right now and keep jumping around from game to game.

I’m still on my quest to actually finish Batman: Arkham Asylum and making good progress. I really need to get through that now that Arkham City has a release date. Next up I started playing Torchlight for XBLA which I can already feel is going to be a time sucker. I can be a steampunk alchemist… pretty much my dream job, so thanks Runic! Another problem that’s going to present itself this coming week is that my copy of Bulletstorm showed up over the weekend my chances of being productive AT ALL this week just went out the window.

Of course this is all not even beginning to consider the mobile front. I’ve been playing Chillingo’s CollisionEffect which is an excellent way to kill time throughout the day. Also on deck is Tiny Wings (still need to complete all of the objectives), Shift! 2, and Battleheart, which is an adorable action RPG.

Wow, so many games I forgot to mention the one I played all weekend! I’ve been playing Epic Mickey for the Wii as well. This game is interesting. The graphics and the controls aren’t at the level of polish I’d like, but I’m an old school Disney junkie and the game is FULL of really cool info and references to old forgotten Disney art and lore. 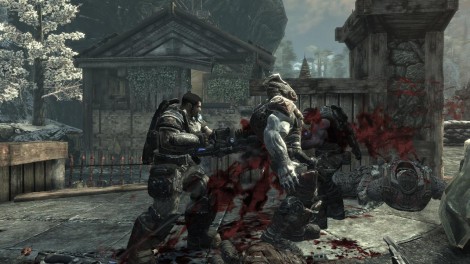 Just like I knew that it would, the Horrible All Nighter sucked me back into the world of Sera and I’ve been eviscerating, brain-panning and vaporizing grubs, bloodmounts and boomers since last Wednesday when I fired up Gears of War 2 to loosen up my chainsaw bayonet.  As is normal for me, that’s all I’ve been playing – the transition from Bulletstorm to GoW2 was a difficult one, though – I’d gotten used to conserving ammo and trying for skill shots and changing to a game where there’s plenty of ammo and constant use of cover and spray-and-pray tactics and hand grenades is de rigeur took some time to get used to.  As excited as I am for a lot of the summer releases, I really need to try out Bulletstorm‘s mulitplayer and wrap up the “Insane!” achievement on Mass Effect 2 so I’m good and ready for ME3; no matter how shiny Torchlight looks, I have to maintain discipline and not get sucked into yet another time suck. 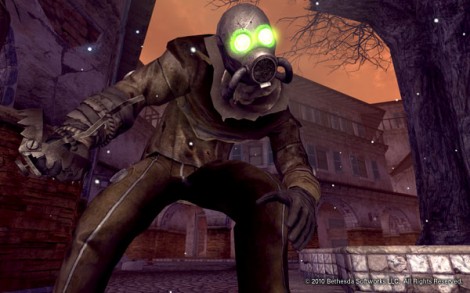 Yo, you with the glowing eyes! You're dead, money.

Like Gifftor, I too got back into Gears of War 2 after some rousing play at the Horrible All Nighter. I really suck at multiplayer, but realized I had yet to finish the single player campaign and put some hours into settling the score with the Locust in anticipation of Gears of War 3. I congratulated myself because I actually completed another game (after about 2 years) which means I’ve completed at least 4 different games this year (out of 146). I also spent some time with the Fallout: New Vegas DLC Dead Money and to be quite honest I am enjoying it so far. There is an increased level of challenge and the ghost people are pretty sweet enemies because they have to be vaporized or hacked to pieces in order to actually kill them. The setting is a bit bland, but there are enough goodies to keep a Fallout enthusiast like me hanging around for quite some time. Fallout 3 DLC was slow to mature and I expect the same for New Vegas, but Dead Money is already hands and feet above Operation Anchorage but not quite as good as The Pitt. 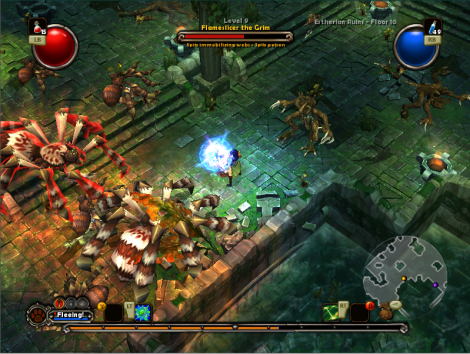 Those are some giant spiders!

I actually stayed focused last week. I thought I would hold off on picking up Torchlight until I had more time, but I had a moment of weakness and put in 3 hours before I knew it. I was too curious to see how the console port went and how it played. Not surprisingly, Runic did an amazing job and the game is a fun as ever. During the Horrible All Nighter, I pretty much stayed in the middle of the pack score wise, but had a damn good time getting reacquainted with Gears of War 2 and getting owned by our crew.

After I got lost a bit more in Torchlight, I knew I had to jump back to Bulletstorm and finish it before I forgot to go back. I ended up being closer to the end than I expected, and was surprised that I was actually interested in the story as it wrapped up. Bulletstorm is fun as hell, addicting, and a nice change to the first person shooter formula. That being said, for whatever reason, I struggle in recommending it to everyone. I’m still chewing on my final thoughts though.

This week I’m going for all of the remaining achievements in Torchlight as I attempt to finish the game for the first time (I never made it all of the way through on the PC). In my downtime, I’ll be racking up the points in Echoes mode of Bulletstorm and continuing our quest towards the Burning Crusade in World of Warcraft. Of course, this is all just to put off my decision as to what to play next… my decision may be swayed by whatever game the Open Gaming Night for In Gaming We Trust goes with this Friday. 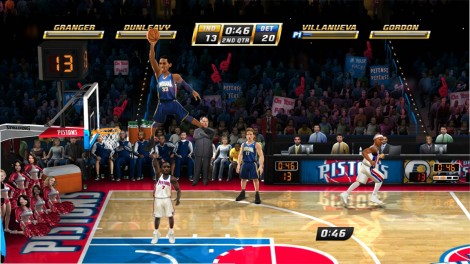 After missing out on the Horrible All Nighter, I thought I’d get some multiplayer gaming in on Friday night. I was all loaded up with Gears of War but then I decided to download the Torchlight demo. 2 hours later I was searching for my wallet to buy the game. Wow, what a long demo and a great game. That is the type of demo that will sell me on a game and it did just that. I never got into any of the Diablo games and I’m glad I didn’t or I would have been addicted to this genre of game a lot earlier in my life.

Also got back into some NBA Jam. I’ve almost beat the regular campaign and it was highly satisfying beating the Bad Boy Pistons down. Sorry Bill and Isaiah. Your high socks and short shorts couldn’t stop Steve Nash from raining down threes and overly complicated layups on your asses.

I am hoping that the Open Gaming Night picks Left 4 Dead 2 because like I’ve been complaining about for months, I want to play that game. Yeah, I know it can be played as a single player game, but the AI is dumb. Although it might be better to play with the AI than me. I’m pretty ignorant when it comes to that game.