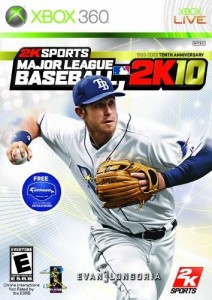 Everyone Has A Price

If you never thought you could make a million dollars playing a video game you either: A. Don’t live in Korea or B. Didn’t pitch a perfect game in MLB 2K10.

The contest was simple but the task was hard. The first person to pitch a perfect game in 2K Sports’ MLB 2K10 will win a million dollars. The act of pitching a perfect game in a world where doing anything perfect is often times impossible. Yet Wade McGilberry, of Semmes, AL completed such a feat.

McGilberry, a gamer who wasn’t into sports games, usually played first person shooters like Modern Warfare 2 and Halo 3. But like anyone who has a million dollars on the table, switched to MLB 2K10 to take a shot at the prize. All those hardcore 2K10 players must be pissed when they heard the winner hardly plays sports titles at all.

He said he would like to pay off his mortgage and use the rest of the money to start a family.

Noble ideas for sure but wouldn’t many of you rather build the ultimate gaming room inside the house you just paid off?