Have you gentlepeople ever heard of a game called DinoCity? Well, neither have I. Until JDevL shared this “retro” review with me, I was blissfully unaware of one of the most inane titles ever published on the Super Nintendo. I understand there are a ton of games released that I’ve never heard of but there is a reason for that. If it wasn’t covered in Nintendo Power, I didn’t know about it. Even if there was a nice little direct-to-video movie that inspired it. Needless to say, DinoCity is lame. Leave it to a man named JonTron to make it less so. 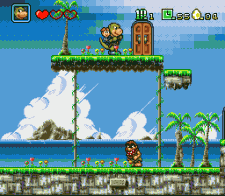 If you are in the mood for one of the best reviews of game none of you have ever heard of, then JonTron is the man for you. I realize it’s a longer video than ones we normally publish, but please stay to the end for a great rendition of a popular song you can’t get away from these days. Check out JonTron’s other videos at his YouTube channel: JonTron Show.