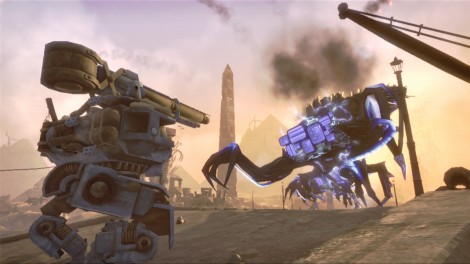 While intimidating, having multiple tv screens for a face is nothing against the fury of a mech

For one reason or another, robots and mechanized suits have gotten onto my list of “super sweet crap I enjoy” as of late, more than likely as a result of playing Front Mission Evolved during my last day off from work. Because of this, I’ve found myself somewhat obsessed with finding the newest frontier of mechanized combat simulators and when it was announced at GDC that Double Fine was working on such a game in Trenched, it’s safe to say I suddenly had a Mountain Dew like level of extreme excitement coursing through my veins and a slight trickle of urine down my trousers.

Details are sparse, but Giant Bomb’s description of the game is all I need : “World War 2 with evil aliens and customizable mecha…what more could you ask for?” In short, nothing. Being that I recently asked for a mech game where combat was directed at monsters, I feel like the telepathic leak in my brain has grown enough to begin inspiring game studios on top of the movie industry giants that have already used some of my ideas ( Cool Runnings, The Pelican Brief and Chocalate’ were all original thoughts stripped straight from my brain).