Very few movies turn into competent video games. Whether it’s the push to meet unrealistic deadlines or the nature of using games as marketing materials, the bar tends to be set quite low. When a game does surpass expectations, it does so by understanding the important themes present in the movie and how to transition those themes into an enjoyable gaming experience. While not without its own negative characteristics (a clunky control scheme and sometimes frustrating game play) The Thing did a marvelous job in using the 1982 John Carpenter movie it was based on as a jumping off point rather than a scene by scene blue print, safely avoiding the land of crappy movie to game translations. 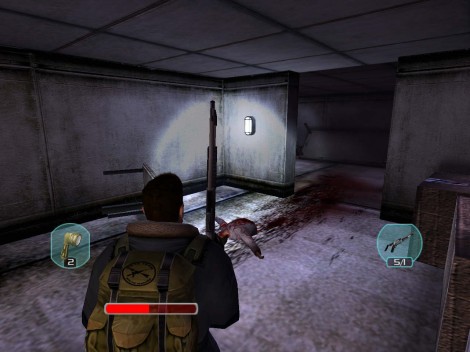 Pretty solid effort in crawling all that way without a bottom half...respect

What made the movie great was the over the top gore and sense of anxiety that comes as a result of the interaction between isolated humans and shape shifting aliens. The game took this idea and ran with it, creating what I feel was one of the more nerve wracking game play elements next to the sanity meter in Eternal Darkness.

Just when you think you know an NPC 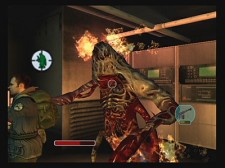 That human disguise was getting way too itchy

The game was a pseudo sequel of the movie involving military teams investigating the occurrences at the Antarctic research station featured prominently in the movie. This meant that the player would need to utilize soldiers as allies throughout the game in order to successfully complete his mission (spoilers aside, things get complicated). The reliance on NPC characters played right into the theme set by the movie in that the aliens could shape shift into human form and hang around without detection, thus creating a cloud of mistrust and tension that fueled how certain character interactions played out. I recall the roller coaster of emotions I felt while playing this game every time I found a fellow soldier after a bout of solo exploration, only to have him suddenly sprout tentacles and attempt to consume my flesh. Don’t get me wrong, it was great every time it happened, but reality would hit soon after and I’d be either alone again or dead. 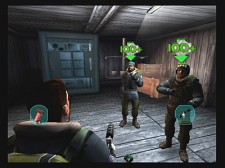 We're not ones for showing emotion, but these green indicators should help

However, shape shifting soldiers weren’t the only problems present when dealing with the squads of grunts patrolling the grounds. Trust, another key element from the movie played a huge role in just how effective my allies were. If they were on edge or scared, they could lose control and while still human, pose as much of a risk to me as the aliens would. I could get moral up by giving them better weapons or perform blood tests that would reveal if anyone in the group was in fact an alien in disguise, but with finite resources available, hard decisions had to be made. Coupled with the all around creepiness of exploring an abandoned research facility in the most isolated continent on the planet, not knowing who to trust and how long to trust them kept tension flowing consistently throughout the game.

To make matters worse, the aliens could only be weakened by conventional firearms and would need to be set aflame in order to finally take them out. For those not in the know, flames don’t always do exactly what you ask them to, which doesn’t always help relations with your military buddies.

Survival horror was hitting its stride around this time, and The Thing made a smart choice in sticking to the genre that best represented the movie it was based on. A bit more refinement could have made the game a classic, but it earned more than enough respect by taking some chances and introducing new and exciting game play mechanics. Thinking back this game stuck with me despite not being all that impactful at the time, which is great for notsalgia but probably why it wasn’t on par with the Resident Evil and Silent Hill series.