You find this hilarious, don't you?

Role-playing games are a major commitment. It isn’t something an adult gamer with limited game time can jump into easily. When I do leap for an RPG it better offer something unique. As solid as Dragon Age: Origins looked in 2009, and as much love and trust I have for Bioware games, I swore off of the game. I’ve played plenty of fantasy RPGs before and these elves, dragons, and magical battle axes just looked like a familiar timesink that I’ve lived through before. There was no reason to consider this one. I was safe. For 2+ years. Until a perfect storm of excuses hit me in one weekend.

There were two flaws that kept me from playing Dragon Age: Origins. The foundation of my denial was 1) the graphics looked weak  and 2) the gameplay was allegedly slow, strategic, and methodical. Enter Dragon Age 2. It embraces stylized graphics, which while simple, unifies the world and character designs much more smoothly. The more publicized feature is that Dragon Age 2 is supposed to play much faster than the original and be a bit less intimidating to pick up and play. 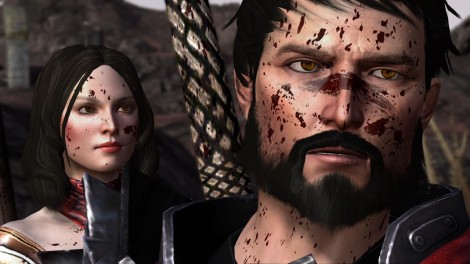 Now that you're done pretending, can we get to saving the world?

With my two biggest gripes allegedly addressed by the new game, I had to try out the free demo.  I was immediately absorbed in the world, the story, and these characters I knew nothing about. I wanted to know every detail immediately. The battles were bloody and satisfying even if I didn’t understand what I was doing. It was fun. The door to Dragon Age was now open, and cannot be closed. I wanted more. I knew I was in trouble.

Thankfully, I planned on playing something else

Luckily, I flat out didn’t have the time for an RPG in my gaming lineup currently. Bulletstorm was on its way via a dependable online shop and my thirst for dragon blood would soon fade away thanks to the power of a four-barreled shotgun. Of course the game ends up being lost in the mail and showed no signs of manifesting, I found myself without Bulletstorm heading into a weekend with prime game time available.

My mind wanders. My mouse wanders. I enter the World of Warcraft and it can’t hold my attention. A game that should scratch the very questing itch my RPG love creates, can’t satisfy me. The game I go to to avoid playing other RPGs cannot contain me. My mouse closes the game, and before I know it I’m hovering over the “buy” button in Steam for the Ultimate Edition of Dragon Age: Origins. No! 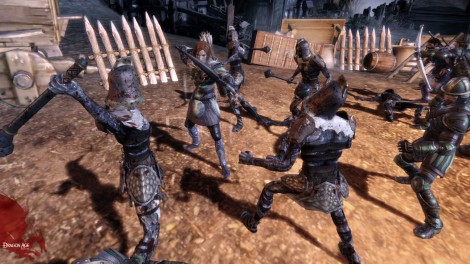 For 2011, I’ve started to keep myself to a game budget. Admittedly, a loose one, but it does exist. I had already bought a full priced game that week, and even if it wasn’t delivered, that money was still gone. No Steam deal was going to cut the price of this game enough to where I could justify it. Saved by the wallet. I decided to take my mind off of killing darkspawn for a while and tackle laundry to figure out what other game that I already own should get my time. Then, my willpower dropped as two bucks in change just fell out of my pant’s pocket. I knew I had a large amount of change stored up in my desk, and I feared there was enough to buy a full priced game.

Turns out I had enough for two games. It was time to stop fighting, and start slaying. I had been defeated.

I was gonna get it anyway

Two days and 10+ hours of game time later, and I’ve fallen in love with Bioware all over again. Sure the world of Dragon Age only differs from other fantasy franchises to the discerning eye, but after my first familiar conversation tree I was hooked. These characters have serious depth. Here I was just scratching the surface of this gaming universe and visions of my first days with Mass Effect and KOTOR came flooding back. I could easily get lost in this game world and I couldn’t be more thrilled.

Thanks to Steam’s lack of ability to take physical cash, and my desire for achievement points, I decided to go with the 360 version of Dragon Age. As it will be easier to port any of my progress to my now inevitable purchase of Dragon Age II.

I may need a support group

As for my fears about Origins, they are still somewhat justified. The graphics do look a bit dated, and it certainly isn’t as fast paced or controllable as the demo for II. However, Origins is still a fun RPG. That’s what I didn’t expect. I knew the rest of Bioware’s prowess of storytelling in a detailed world would hold strong. I just thought I may be bored inbetween those moment, and that is certainly not the case. Anyone like me that thought Dragon Age: Origins was “just another Bioware” game is missing out on the definitive fantasy experience on consoles, and one that rivals the best the PC has to offer. The bloody and dark tone of the world feels much more adult than most of the fantasy games available out there, and the twists on classic fantasy norms make you appreciate the originality the game has to offer under the surface.

Dragon Age was easy for me to dismiss as a game I’ve played half a dozen times before. Now, I have a feeling those games were just there to prepare me for what the Dragon Age franchise has to offer.