It was bound to happen sooner or later: a game released on the iPhone or iPod Touch that would be owned by nearly everyone. That game is Doodle Jump. 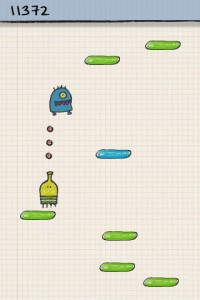 It's not all about jumping. Tap to shoot.

Released in 2009, the game has gone on to sell four million copies. That’s four million more than anyone ever expected for their simplistic game of tilting the phone back and forth, guiding the jumping character to each floating platform.

The premise is so simple yet so addictive. Games can be played in very short amount of time. Whether you are waiting for a bus, in line for some concert tickets, or sitting on the toilet you can find time to play.

Listed at $0.99 it’s an easy impulse buy. The game’s co-creator Igor Pusenjak of Lima Sky told Kotaku that “Those are all paid downloads as there never was a ‘lite’ free version and Doodle Jump never had a ‘free for a day’ or similar promotions.”

That means every download has been a sale. And that’s not even factoring the Android App Market where this game has been available since March at a higher list price ($3.29) than on the Apple App Store ($.99).

It’s crazy to believe in the ‘hard to find anything’ App Store that one game can stand out over the others and be so successful. But once you hit that top apps list, you’re set.

Try Doodle Jump for yourself, to see what all the fuss is about.

3 Comments → Doodle Jump Has Made A Ton of Money